Gasoline Prices - can you solve this mystery?

How cool is this, a friend of mine sent me the image below
The caption read:
"This was taken in Calgary." 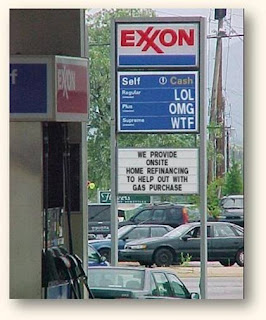 check it out, look where he says it's from, it's exactly the same sign as
the one below and the one below states that it's from
"On the Yellowhead Highway #16 in northern British Columbia" 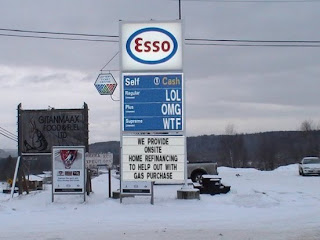 ...with all the exact wording below the gasoline prices

So someone in the one of the images has done a cut and paste job!

I could be wrong, but it would be just like an American to take a Canadian
sign, cut and paste it onto an American Icon (EXXON) and take the credit....
the internet and people are amazing in how they manipulate things

Does anyone know for sure which one is the correct sign?

If the price in the USA were $4.54 per gallon, US citizens would revolt!

The other point that I am trying to make is that we can't forget that what
we are viewing and reading could be dis-information or even worse, complete
fraud!

Be careful out there

All the best
Mark

Posted by Mark Argentino at 6:05 AM